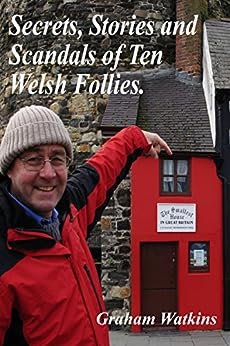 Secrets,Stories and Scandals of Ten Welsh Follies contains the stories behind ten weird and wonderful Welsh buildings.If you enjoy unusual tales, quirky human history and delight in the ridiculous and the vain you will enjoy this book. Discover why...The undefeated American Boxing Champion Rocky Marciano lived in a Welsh Folly in Swansea.6ft 3 inch Mr. Jones slept in a strange house in Conwy with his feet hanging out of the window.A pipe smoking shipping magnate upset his wife and built a folly complete with battlements.What possessed William Jones to build the strange folly that is Clytha Castle.Why Lord Mostyn built a track through a house with a road underneath. His strange folly is still inhabited today.These are just a few of the entertaining Welsh Follies in this book. Discover why...A deserted lighthouse on a golden sandy beach has a strange moaning statue at its top.A future king turned his nose up when offered a stately folly castle.There is a bizarre folly clock tower that looks like a lighthouse standing in the middle a boating lake in Cardiff.A magnificent folly tower on Anglesey records the exploits of a one legged man.Bodysgallen Obelisk has upset the neighbours.Discover who erected these strange buildings and why, what secrets lay hidden in their pasts and how they have been treated over the years. Folly hunters have researched odd and strange buildings but never before have the secrets of Welsh follies been told so entertainingly. Every folly has a tale to tell about the special people who built them as if the follies themselves are a window into another age or world, one which is fun and well worth exploring.Scroll up, download this free eBook today and give your chuckle muscles some exercise.