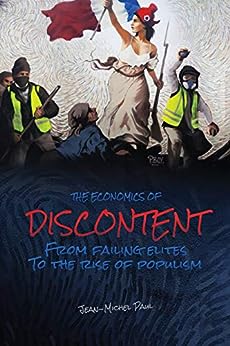 The Economics of Discontent: From Failing Elites to The Rise of Populism

The social contract that has underpinned growth and political stability in the Western world since World War II has broken down. Houses, health care and higher education have become unaffordable to a majority of people, while the burden of unregulated monopolies, globalization and uncontrolled immigration has fallen disproportionately on the lower and middle classes.Wrapped in political correctness, an increasingly out of touch Western elite continues catering to special interests and fails to grasp the urgency for change. Populist movements harnessing public anger appear unable to propose and implement effective solutions.The last financial crisis was bad enough. But the next crisis will spread deeper and wider. And yet we stand economically, politically and most of all intellectually unprepared.This book is the story of how we have arrived at the brink of disaster and how we can move away from the win-lose policies of recent decades to restore much-needed balance.